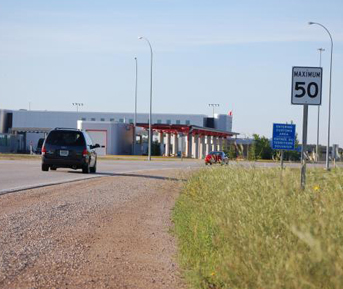 Emerson historically, was the gateway to Manitoba from North Dakota because it was the only direct rail link between eastern Canada and the North West United States. This created a need for the first customs building in the Northwest, which was built in 1870.
In 1910 the customs offices moved from its original building into the post office. In 1947, the customs building moved again, to the present day hospital.
In 1949 a new customs building was built in West Lynne. Fifty years later, the building was demolished and a new modern building was built, and opened in June 1999.
The port of Emerson, located on Provincial Trunk Highway 75, is a key factor in the Mid Continent Trade Corridor. The port ranks among one of the busiest U.S.A./Canada borders crossings in Canada.
Todays fire rating is Low