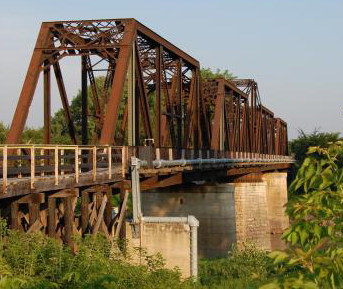 Emerson's prosperity and optimism peaked in 1879 when the Pembina branch of the CPR connected with the American line to St. Paul, Minnesota. At the time, Emerson was the only direct rail link between eastern Canada and the North West. The population swelled to 2,500 by 1882 and business boomed.
Emerson proudly called itself "The Gateway to Manitoba" and for a time threatened to outstrip Winnipeg as an urban centre. In 1883, West Lynne, the rival town on the west bank of the Red River amalgamated with the City of Emerson. However, population dwindled when the CPR provided a direct overland route through Winnipeg.
In October of 1878, the "S.S Selkirk" steamboat delivered the first locomotive to the Canadian Northwest, the "Countess Dufferin". The Countess Dufferin later joined with St. Paul and Pacific Rail Roads at the International Boundary.
December 2nd of 1878 the Red River transportation system died because of frequent use of the railway system.
Over the years the use of the railroad system for personal transportation dwindled. However, the railway system is still very actively used today as the "Gateway of Manitoba" for goods being transported into the U.S.
Todays fire rating is Low